“The first step toward change is awareness.”  ~ Nathaniel Branden 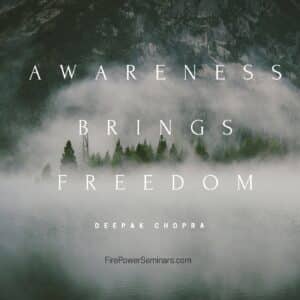 Have you ever looked at your organization and felt that things weren’t working, but not been able to catch exactly why?

In our ten years in the business of empowering and inspiring organizations and individuals to realize their full potential, we’ve noticed something interesting about the nature of true, lasting change: it can only happen if we’re aware of what’s not working first.

On an individual level, human beings tend to become frustrated when we don’t receive the results we expect or desire. Sometimes it’s easy to tell that we’re not getting what we want – but it’s a little trickier to wrap our hands around exactly why we don’t generate the results.

This phenomenon translates on a larger scale, as well. The organizations we run – the corporations, charities, church groups and non-profits – are made up of nothing more than a group of individual people, and they become a macrocosm of this our beliefs and habits. This often means that when something’s not working, we can’t clearly see why.

But it’s not just about generic team building exercises and forced heart-to-heart conversations, though those things might provide temporary, superficial solutions.

Lasting change within an organization starts on an individual level, and over the last ten years we’ve worked with thousands of people and refined our techniques. We know what works. At its most basic premise, the key to initiating change and resiliency among employees is simple: cultivating consciousness among each individual.

The Four Stages of Learning

According to the study of Neuro-Linguistic Programming (NLP), there are four stages of learning and growth. At Fire Power Seminars, we have found these four stages to absolutely reign true, and we have built our seminars and exercises around these ideas.

If you’re not getting the results you want, it’s because there is a breakdown somewhere along the way, whether it’s in the approach, the systems and processes or some other aspect of business.

This is where you become aware that you need to do something but you don’t yet know how to do it. For instance, if your company runs an assembly line that is taking too long to create the product. You may be conscious of the fact that it’s taking too long before you understand just how to solve the problem.

When we teach people our communication seminars and workshops, we often hear conscious incompetence at work in their language patterns. They’ll utter phrases like, “I’ll try to do better.”

Anyone who has watched Star Wars might have Yoda’s famous words ringing in their ears: “Try not. Do or do not.”

When we tell ourselves that we’re going to “try,” there’s a good chance that whatever we’re “trying” won’t be successful. “Try” is a hidden escape route that we use without even realizing it. “Try” is an excuse used often when someone is in the throes of conscious incompetence – and it may indicate that the person either don’t want to actually make a change, or he or she does not believe they have the ability to effect a change.

When one becomes aware, they break through an obstacle that was holding them back. Usually there is a belief living right in the middle of it. When we “try” to make a change, we’re giving ourselves an out that allows us to discontinue the work before busting through the core belief that’s holding us back.

This is where you know what you know how to do. Sound confusing? It’s not really – think again of the assembly line analogy. Let’s say you know the line is taking too long, and now you know it’s because the process in step five doesn’t have the most effective types of nails. So you can now deduce that you need to get new nails.

You might not know exactly where to get those nails. That will take some research. You might even have to experiment with a few different kinds of nails before you – eh – hit the nail on the head, so to speak. But you’re aware of the problem and the potential solution, and you know what to do next.

Finally, we reach the stage of unconscious competence. Each of us has certain routine skills that we perform every single day without thinking about it. Driving a car. Brushing our teeth. Fixing a bowl of cereal for breakfast. Typing a blog post.

Unconscious competence is what happens when your new knowledge becomes a habit and a skill that your body understands and can perform from muscle memory. It’s become part of who you are.

Transitioning from the Individual Level to the Group Level

Bruce Lipton has done numerous studies on cellular health that have revealed that our beliefs drive everything in our lives.

When an individual holds a certain belief – say, for instance, she believes that she isn’t smart – she will view the world through the filter of “I’m not smart.” An offhand comment by a friend or co-worker meant to be a joke will be internalized as further proof that she is not smart. She will continue to look for clues that support her “I’m not smart” argument until she has gathered overwhelming evidence and thoroughly convinced herself.

Holding that belief, this woman will unconsciously take actions in alignment with “I’m not smart” because that is her belief. Others around her will begin to believe that she is not smart, perpetuating the false statement.

Of course, right now we’re talking about the beliefs of an individual, but these are important. A corporation is only as resilient, creative and profitable as the people who work within its structure. What beliefs do you see people in your organization clinging to?

Do employees at your company believe that they aren’t well paid? That the company is only out to make a profit? That it’s every man for himself? Imagine the results that a company made up of those beliefs would generate – yikes!

What if, on the other hand, the employees at your company believed that the higher-ups in the organization had integrity, and that the company was truly fulfilling its mission statement? That the company really cared about its employees and that one of the collective values was teamwork and collaboration?

At Fire Power Seminars, we spend a lot of time examining belief patterns and how they can help or hinder us, as individuals and as corporate entities. In fact, uncovering and shining a light on belief patterns is one of our company values because we have seen time and time again how powerful beliefs can be.

That’s what our programs do for organizations. Once individuals can see how they’re treating each other and why, they will understand where changes can be wonderfully beneficial. And then they can make the changes.

Here’s how our process works: Fire Power Seminars does not offer a “one-size-fits-all” model for growth and development within corporations, because every organization is different.

When we work together, our goal is to get to the kernel of the issues you’re dealing with in your organization and hand pick certain activities that will specifically work to address those things. Don’t worry, while all of our activities will take your employees just outside of their comfort zone, they’re hugely rewarding and even fun!

The best thing you could do for your company is help your people get to know and trust each other, and the first step to doing that is to uncover their unconscious beliefs. If you would like more information, contact us to get in touch with our team.

Karen is passionate about sharing powerful programs on communication, empowerment, team building and transformation. With a father from Kansas and a mother from Puerto Rico, Karen has a unique cultural mix that has inspired her to challenge stereotypes and “push the envelope” at every opportunity. She co-founded Fire Power Seminars with Connie Phelan in 2006 to empower individuals, organizations, and companies to achieve more than they ever thought possible.