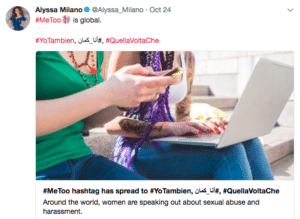 I recently read the New York Times article written by Margaret Renkl, “The Raw Power of #MeToo”. It jolted me into remembering a sexual harassment incident I encountered early in my banking career.

But first, kudos to actress Alyssa Milano who started the social media hash tag #MeToo when she tweeted out “If all women who have been sexually harassed or sexually assaulted wrote, “MeToo” as a status, we might give people a sense of the magnitude of the problem.” Also a big thank you to Margaret Renkl for sharing her powerful story that made me recall my “#MeToo” experience, which I share below.

I was young, in my first career in banking, when an Executive Vice President approached me at the annual holiday party to let me know he was extremely pleased with my work. He told me there was a bank initiative he wanted me to review. As you can imagine, I was thrilled that my hard work was paying off. Someone with power and clout was asking for my opinion. He proceeded to tell me that the information for review was at his office, which was at a different location, and asked if I would be willing to go with him to discuss the project. Although I thought it was rather odd that he would ask for my opinion at a holiday party, I was naive enough to let those thoughts slip away as I reminded myself who he was and the position he held. Much to my surprise, shortly after the elevator door opened up on the top floor of the corporate offices and we went into his office, he opened up a cabinet and poured two drinks. What? My mind was racing! I was confused. I was not there to have a drink. I was there to review an important project. I let him know as politely as I could that I did not want a drink – just the information he wanted me to review. Then came the second surprise – he unbuckled his belt and told me how he had a crush on me. I was shocked and horrified! He was married with several children! I informed him that I had no intention of doing anything with him. Thankfully, at that point, we heard a noise down the hallway; it was the cleaning crew. So he quickly buckled his belt as I busted through his office door to get to the elevator. I felt humiliated and embarrassed. I thought my short-lived career was over. No words were spoken. The EVP drove us back to the party, which had ended, and now my car was locked inside the bank’s fenced parking lot. Further humiliation! I demanded that he drive me home, which he did in complete silence. I don’t scare easily, but my heart was racing the entire time.

When it was time to report back to work, I didn’t know what to think, do or say. My car being locked in the parking lot was not lost on my coworkers either; some who saw me leave the party with the EVP. My reputation would take a hit, and their teasing showed they had absolutely no idea the dangerous situation I found myself in.

Upon seeing the EVP at a management meeting for the first time after the incident, he acted as if nothing had happened and let me know that I would be receiving a promotion. What? Why? My innocent self was shattered, yet again. How did I get the promotion? Was I deserving of a promotion? It felt like the promotion was something the EVP did as ”hush money” to keep me quiet, but I knew deep inside that I had to share what happened with human resources, even if it meant losing my job. I did, and much to my dismay, nothing happened. Nothing. Zip. Nil. Nada. Zilch. Zero! I suspect it was not the first time they heard of this man’s behavior, which we now rightly consider sexual assault.

Fortunately, on the backs of all the women who have had the courage to come forward to take back their power from their sexual harassers and assaulters, we have reached a tipping point. I have no doubt that today my report to human resources would have been handled much differently.

It is a disgrace that for far too long our society has let these perpetrators off the hook, instead calling the accusers liars, implying that they are out to get money. We now know this as victim shaming and victim blaming. Although a large majority of these women never saw justice in their lifetime, their fight was not in vain. Imagine if a pebble represented each woman that had the courage to speak out, and for those who suffered in silence. #MeToo has shown us that the individual pebbles have created a mountain. Today women all over the world are standing on that mountaintop, on the backs of those who came before us, using every once of our courage and grace, to take our power back!

Karen is passionate about sharing powerful programs on communication, empowerment, team building and transformation. With a father from Kansas and a mother from Puerto Rico, Karen has a unique cultural mix that has inspired her to challenge stereotypes and “push the envelope” at every opportunity. She co-founded Fire Power Seminars with Connie Phelan in 2006 to empower individuals, organizations, and companies to achieve more than they ever thought possible.