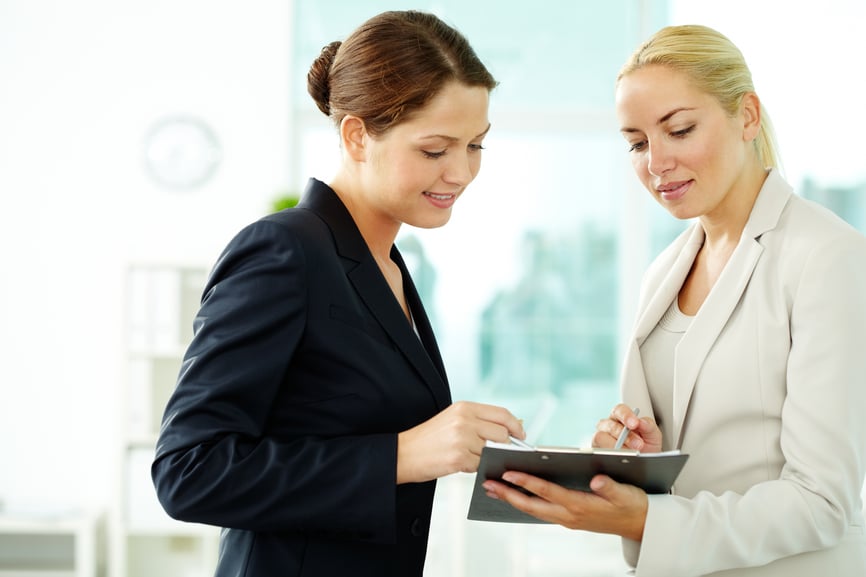 “When a woman speaks in a professional setting, she walks a tightrope. Either she’s barely heard or she’s judged as too aggressive. When a man says virtually the same thing, heads nod in appreciation for his fine idea. As a result, women often decide that saying less is more.” Sheryl Sandberg and Adam Grant – Speaking While Female

While there are more women in corporate leadership than ever before, the statistics are certainly not reflective of women’s capability and integral role in business. In the United States, women hold only 23 percent of U.S. business-leadership posts out of 36 countries surveyed for International Woman’s Day, which ranks the USA at 22 out of 36. Almost 1/3 of businesses in the United States have no women in senior management positions.

We know women and men have different communication styles, so how can women in leadership emphasize their strengths while developing their communication styles? The key to many of these collaborative communication strategies for the smart leader is to be the lightning rod for the company; the person who holds the vision, but also attracts input from employees and teams that increases profitability, makes for cohesive team dynamics, and strengthens the bottom line.

Build Rapport – Women naturally gravitate towards building rapport in communication. In business, rapport builds powerful teams that are visioning and developing together. The foundation of trust within the company generated by rapport underlies the development of business outside the company. One can build rapport through words, tonality and physiology (body). Here’s a brief story from one of the Fire Power founders, Karen Pfeffer, on how she built rapport with a prospective client:

Karen was calling on a banker who she had known for many years. They had spoken about working together but it never quite happened, and she wanted to seal the deal. Karen realized that she did not have complete rapport with the banker, and was able to identify that the banker’s primary communication modality was kinesthetic, and hers was visual. Karen took the time to observe, and realized that while she spoke fast, the banker spoke slowly. She would speak in terms of visual (‘Do you have a clear picture?’), and the banker would speak in terms of the kinesthetic (‘It doesn’t feel complete; can you walk me through your recommendations again so I can wrap my hands around the concept?’).

In reflecting upon this revelation, Karen realized that she was operating from her model of her world, not the bankers! And, if she was to build rapport and trust, she had to be more understanding and give information in a way that would make the banker “feel” comfortable in moving forward – not “see” information! With this knowledge, the next time she had a one-on-one meeting, she shifted the way she was communicating with the banker to build greater rapport. The banker liked to take his jacket off and sit back in his chair, so she did the same. Karen consciously slowed herself down, started speaking more slowly, making similar word choices to the banker. In fact, her word choices were much more centered on how the situation “felt” as opposed to what it “looked like”.

In the past, Karen usually brought her brochures to these kinds of meetings – being a visual person; she assumed her audience would want to look at everything – but this time she didn’t. She just started giving kinesthetic examples of what the deal would be like in action, and before long the banker exclaimed, ‘This is going to work!’ Then, Karen was treated to a wonderful lunch, and the deal was made. In the banker’s words: “I don’t know how to explain this, but for the first time ever, I feel like we really connected and understand how we can help each other to make this a win-win”.

By observing and paying attention to detail, one can build rapport quicker, and communicate more effectively with others.

The Collaborative Approach – Rather than a top down mandate, utilize the senior management team and other employees for collaboration and brainstorming. The collaborative approach, including building rapport, strengthens a team and encourages investment from employees who feel as if they are really making a contribution to the direction of the company.

As a woman owned business, we listen and ask questions when we receive inquiries about team building, empowerment programs, or communication workshops, to determine if we are a good fit. What is the desired outcome? How can we work best as a team to ensure that the needs are met, based on the demographics, participants similarities and differences, and overall objectives. How do you want the participants to feel when the event/ program is over?

Facilitate Dialogue – Approaching employees with a clear idea and facilitating dialogue on the development and execution of the idea invites diversity of communication and ideas. When people trust each other and look out for each other, they will work harder, take more calculated risks and ultimately achieve greater success.

A great way of getting candid feedback is through an anonymous survey. You can conduct research, get candid feedback, and gauge employee satisfaction. Another great tool is facilitating a simple personality profile through “DiSC” or “Insights” – simple and informative personality assessments and profiles.

Listen Well – Communication is a two way street. Listening often and listening well gives executives and leadership great insight to what is really going on with employees and throughout the company. Pay close attention when employees are sharing with you and “listen with your eyes”, noting body language. Are employees telling you what you want to hear or do they share freely knowing their leadership has an open door and open communication policy?

Notice language patterns, and if they are helping or hindering. If you are interested in identifying language and communication patterns, there are simple and fun communication activities that bring out participants patterns quickly, for participants to become aware of their patterns and how they can enhance their listening skills.

A great example of this is an activity Fire Power Seminars facilitated at an executive retreat, where the participants had to do a simple exercise that required them to stand in a circle and move an object to a designated area as a team, without losing contact with the object. As soon as the exercise started, patterns immediately appeared, as they were “doing” what they typically did through the activity without “thinking” about how effectively they were listening to each other. During the debrief following the activity, one of the participants shared that they realized how they could enhance their listening skills. The body thinks very differently than the mind does, and we may think we are great listeners until we participate in activities where we have to actively listen.

Also, put away all distractions to fully listen to another person – really give them ALL your attention!

Be Prepared – Gender challenges in the workplace and in corporate leadership are not going to disappear overnight. Be prepared with a strategy for being interrupted and challenged that allows you to put your best communication tactics forward. Calm and firm refusal to be derailed in a meeting or presentation sets you up for future success. Implement a no-interruption policy for everyone at meetings. Ask those in the meeting to put away all electronics to keep everyone focused. And, if you notice you are getting derailed, breathe! Refrain from using negative words such as “can’t”, “won’t”, “don’t” and “I’ll try”.

Get Curious – Curiosity as a conflict resolution practice is powerful – don’t get mad, get curious! During conflict and heated arguments, misunderstanding is one of the quickest paths to escalation and communication breakdown. By being curious and asking a question, it slows down the questioner by putting them in a position to gather information and the person who is being asked may perceive that they are being heard or at least the communication door is being opened. Employing curiosity as a daily practice outside conflict can also increase creativity, shakes up routines that may have become stagnant, and allows for new exploration.

Paying attention to your own communication style and how you communicate as a leader can reveal valuable information and allow you to explore what areas may need breakthrough work.

Fire Power Seminars has communication and empowerment seminars available for executives and leadership teams to enhance and inspire new levels of effective communication. For more information about empowerment, team building and transformation, contact Karen at 954.232.4486 or Karen@FirePowerSeminars.com